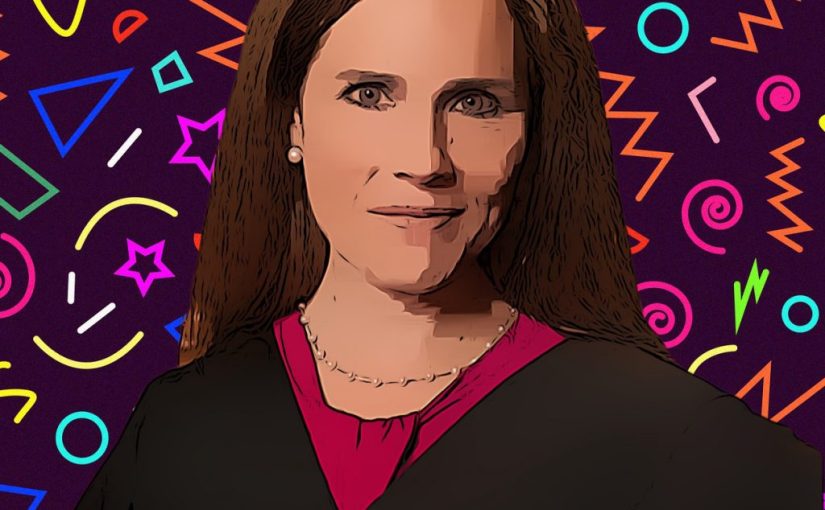 “Her very existence repudiates the left’s binary thinking about womanhood, that women have to deny what makes women different from men to achieve professionally. And that’s why they hate her.” – Joy Pullman

Justice Amy Coney Barrett is debunking all the leftist well spun narratives. She goes against everything the anti women coalition and what they stand for with her husband, 7 kids, and her unfaltering faith and her quickly advanced career. ABC poked holes into their well manicured doctrine as the lefts finely crafted web of lies began to unravel.

During their anti-women’s marches, some stand with signs saying, “I want to break glass ceilings!” Yet, when a woman is being considered for the highest court in the land, we begin to see the irony drip from their playbook. They can’t wrap their “open minds”  about how Christianity isn’t something one can simply define. With all of its ambiguity and “rules” they would have to follow.

The hearings continued on about how a Justice Barrett would force us back to a time where women will be fearful of strong work force discrimination and the rights of women would be rolled back. Conclusions were drawn from a woman, who has four daughters, will somehow take the power out of the lawmakers hands into her own. Democrat leaders poked and prodded at ACB to see if she would crack under their hypotheticals and tiresome questioning over the Second Amendment, Affordable Care Act, and Roe v. Wade. Under the Code of Conduct for US Judges are included the ethical canons that apply to federal judges and provides guidance on their performance of official duties and engagement in a variety of activities. Barrett stated, “Judges can’t just wake up one day and say ‘I have an agenda. I like guns. I hate guns. I like abortion. I hate abortion.’ and walk in like a royal queen and impose their will on the world.” She said she’d “keep an open mind” on any case coming before the court.

As a self described originalist, like her mentor Justice Antonin Scalia, Senator Chris Coons claimed that she will follow suit to how he has ruled. “I hope that you aren’t suggesting that I don’t have my own mind,” Barrett said, “or that I couldn’t think independently or that I would just decide like, ‘Let me see what Justice Scalia has said about this in the past.’ ” I assure you I have my own mind.”

“It’s tempting, in light of all this, to want to give up on white women. But even if we see history for what it is and adjust our expectations accordingly, the fact remains that white women make up a voting bloc that is too massive to ignore or simply write off.”

The goal post of equality has moved from rights over our own body and equal pay to abortions on demand and free birth control. Without them, they will divert to some perverted idea of the Handmaids Tale and must stay submissive. They assume white Christian women go aimlessly into a voting booth, checking the red box like our patriarchal husbands who command over us (sarcasm insertion complete).

Since the beginning Satan has tried to drive a wedge between God and His creatures. Genesis 3:5 “For God knows that when you eat of it your eyes will be opened, and you will be like God, knowing good and evil.”  Satan deceived Eve by causing her to make her decision based on what she could see and not what her emotions and reason told her to be right, even when it was contrary to what God had already told her. Eve thought that if she and Adam ate the fruit they would gain infinite wisdom and live forever.

1 Corinthians 10:13 No temptation has seized you except what is common to man. And God is faithful; he will not let you be tempted beyond what you can bear. But when you are tempted, he will also provide you a way out so that you can stand up under it.”

For Christ to accomplish God’s will, he had to face Satan and prevail. In Matthew 4, Christ is presented as one who served faithfully regardless of opposition. Showing temptation doesn’t mean to succumb to failure. It should be an encouragement to all that find themselves as pawns in Satans clever underhanded plans.

Just like the wedge of the enemy the unsuccessful attempts to make ACB one of their own was a devastating blow to feminists everywhere. It should be no surprise to the left that in fact not only do Christian women have their own minds but they can also choose to be mothers and doctors; teachers and scientist; lawyers and even a Supreme Court Justice. That we can choose to show our large families love and stand firm in a boardroom. It is a loud cry for Christian woman to stand true to who you are. Do not let anyone create a narrative other than the one God has written for you and your life.