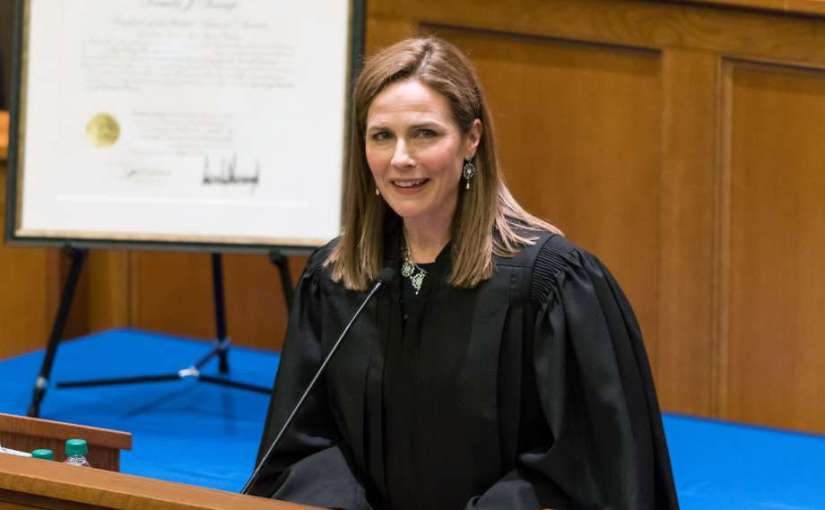 This Is An Endorsement

As Rod Dreher ponders the fate of Congress and the Supreme Court by demonstrating the madhouse that is American Politica:

We know — we know — that the Democrats will stop at nothing to have their way with the Supreme Court. We know it because of what they did to Kavanaugh. I remember not having the least interest in Kavanaugh’s nomination — he struck me as just another College Republican type — until I saw what the Democrats tried to do to him. Emotionally, this connects. This is what the left does to conservatives, or to anyone not on side, at institutions they control. So the idea that a quick Trump SCOTUS nomination would be unfair to Democrats goes nowhere with me.

Here at Truth In Focus we have personally decided to publicly support Amy Coney Barrett as America’s next Conservative female Supreme Court Justice. Now is the time to stand up to the radicals who threaten to terrorize, riot, burn, and destroy if they do not get their way.

Threats of this nature are simply undemocratic; a form of mob tyranny amassed by wild Marxists whose idea of freedom requires everyone that they disagree with to either keep their mouth shut or face the consequences. Reza Aslan: We. Won’t. Back. Down.

Today’s support for Amy Coney Barrett is not a call of support for President Donald J. Trump or the Republican Party. This is a legitimate judicial pick whose jurisprudence avails Conservative legal standards.

She avows to protect the Constitutional sanctity of life, the second amendment, religious liberty, private property, and other constitutional protections through an originalist understanding required of all dutiful conservative interpreters of the Constitution.

Does that mean her track record is flawless? Never. She is a human-being like the rest of us who are susceptible to making poor decisions but her qualifications and her character speaks for itself. A case bound to be controversial was her decision in EEOC v. AutoZone where she sided with the majority to deny a petition for rehearing a case considering the following question under Title VII of the Civil Rights Act of 1964:

Does a business’s policy of segregating employees and intentionally assigning members of different races to different stores “tend to deprive any individual of employment opportunities” on the basis of race?

A process known as “steering” the case will be an open sore considering racial tensions. If selected, it will be good for 7th Circuit Court of Appeals Judge Barrett to address this issue openly for the sake of judicial clarity. Granted there is plenty of room by which to legally interpret this case without being unfairly categorized as “pro-discrimination.”

Links below include her background, judicial decisions, and more:

The dogma lives loudly within you, and that’s of concern when you come to big issues that people have fought for years in this country, Feinstein said to Barrett.

Note: Last edited September 21, 2020. Some new additions were put in for clarification.

A Christian, a Philosopher, and a Writer. View all posts by E. Kyle Richey

One thought on “Amy Coney Barrett: Our Next Supreme Court Justice Whose “Dogma” is Good for America”